An interview with Derren Brown 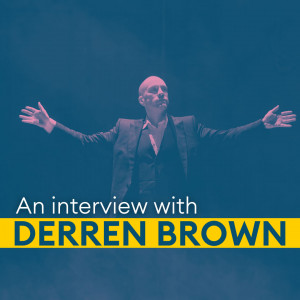 We bring you interviews from people from films and TV as well as the Forces world and beyond.

Gemma-Leigh James from BFBS Scotland caught up with illusionist, Derren Brown as part of his 2022 tour. He talks about his new look show, what happens when things don’t always go to plan, if we create our own luck and we get an update on Steven who appeared on the TV show apocalypse which was filmed at former Royal Air Force station RAF Bentwaters!

Natasha Reneaux from BFBS catches up with Jane Horrocks and Samson Kayo from Sky 1's sitcom Bloods ahead of the release of the new season.

Bloods is a comedy series about a mismatched paramedic team based in South London.

Best of the guests from Hogmanay

Listen again to Mark McKenzie & Gemma-Leigh James and the best of the guests from their BFBS Scotland Hogmanay special!

Bring a change of pants as we take a night-time tour of Drakelow Tunnels in Kidderminster, said to be one of the most haunted places on earth!

Listen as Mike Howarth and Adam Richardson go in search of the paranormal in this underground complex of tunnels. Drakelow was a top-secret military facility during the second world war and became a nuclear bunker in the 1980s.

Bravo 22: The performance of their lives

Charlene Guy and Royal Marine Cassidy Little go behind the scenes of a new production from the makers of “The Two Worlds of Charlie F”, the 2012 stage show which featured wounded, sick and injured forces personnel.

Hear how the theatre company Bravo 22 created a new play including wives, veterans and members of the wider military community.

Charlene and Cassidy meet the cast, including 15-year-old Estelle Wilkinson, who joined the theatre company to learn more about her dad's role as an Army Reservist, and Luke Delahunty, a veteran of the RAF Regiment who was paralysed in a road traffic accident.

Without a script, armed with their own stories and experiences, this extraordinary cast rehearsed for just seven weeks before performing live at the Aylesbury Waterside Theatre.

Colin Thackery: The Next Stage

Colin Thackery is the singing Chelsea Pensioner who at the age of 89 became the oldest person ever to secure their first record deal.

Here he tells Richard Hatch and Verity Geere about the impact of winning the competition and looks back on his life serving all over the world with the Glorious Glosters.

Andy McNab talks to BFBS about how he was abandoned as a baby, became a delinquent teenager, and then changed his life by joining the Army. Hal Stewart talks to Andy about command of Bravo Two Zero during the Gulf War, the challenge of passing SAS selection and he plays some of his favourite tracks.

The sequel to the award winning ‘I Am Unconquered’, follows three competitors and examines their heroic acts and everyday struggles.

Told in their own words, these intimate tales are an inspirational look at the transformative power of sport.

Hear from the veteran whose four-year-old daughter saved her life and a triple amputee who falls in love with his nurse.

‘I Am Unconquered’ is a collection of intimate tales about the difficulties some veterans face and the transformative power of sport.

Stephan Merchant is a writer, director, comedian and actor. Here he speaks to Jason Webster about his career, from the Bristol stand-up scene to the Hollywood hills.

The Cadet Takeover With Andy McNab

Tim Humphries presents a #CadetTakeover Podcast with Andy McNab. Andy talks about his life, including his 8 years in the British Army and 10 years in the Special Air Service.

Gary Cahill, Emile Heskey and Sir Geoff Hurst chat to BFBS in this 30-minute World Cup 1966 special. On a hot July afternoon in 1966, England lifted the World Cup in Wembley Stadium in front of 97,000 people.

The stadium was filled with cheering and excitement making football fans all over the country feel the love for the beautiful game.

Sit back and enjoy half an hour of side-splitting forces comedy, all tied up with tinsel and coloured fairy lights.