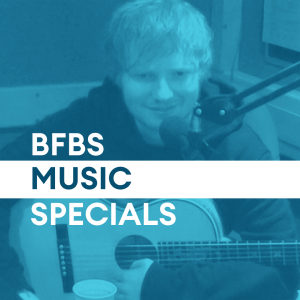 Listen again to some of the fantastic music specials recorded exclusively for BFBS by great musicians.

Dubbed "One of Britain's best bands", Grammy nominated, Mercury prize winners, Wolf Alice have been wowing fans and silencing critics with their superb brand of dirty rock n roll for over a decade.

The new album "Blue Weekend" is released this month (June 2021) and Wolf Alice tell Amy Casey all about their hugely anticipated third album, playing virtual Glasto and setting the standard for UK music and beyond.......

Joel Corry on the Big Show

From tween DJ to packing out the O2, Joel Cory has worked his socks off to stake his claim as superstar DJ.

In this 30 min program, he tells Amy Casey all about his graft from paying mum and dad to drive him to parties (he was too young for a license) to knocking on every door around the club scene in Ibiza, his commitment to his fitness, Geordie Shore and his Army Grandad.

The Mountbatten Festival of Music

Jess Bracey presents interviews and musical highlights from this year’s Mountbatten Festival of Music at the Royal Albert Hall.

The festival showcases the incredible musicianship and pageantry of the Massed Bands of Her Majesty’s Royal Marines and features a wide range of musical styles. There’s music from the big screen, some superb solo performances, as well as the traditional marches and overtures that have proved such a hit with audiences over the years at this annual event.

After headlining at world-renowned venues like The London Palladium and The Royal Albert Hall, The Overtones have built a name for themselves as one of the UK’s most prolific live acts.

From performing at the Queen's Diamond Jubilee at Buckingham Palace to singing at the Brandenburg Gate in Berlin in front of one million people, The Overtones have entertained at some of the biggest events on the planet.

This show was recorded in December 2019, the end of a huge year for the band with the arrival of BFBS' very own Jay James, the release of a new Christmas EP and a Christmas tour.

Here they talk to Mike Howarth.

"We've had a good run, the band still like each other so that's always a bonus so yeah we're doing alright."

Listen below to the full interview plus some of their greatest hits and new songs from 'Scream Above The Sounds' including 'Before Anyone Knew Our Name', the bands' tribute to their drummer Stuart Cable who died in 2010.

From humble beginnings in the North East, to festivals and stadiums across the UK and Europe, Sam Fender has claimed his spot as one of today's most exciting artists.

He won the Critics’ Choice Award at the 2019 Brit Awards and his debut album ‘Hypersonic Missiles’ was released in September 2019.

Here Sam talks about how his music is fuelled by his belief that great guitar music still has the power to change lives and influence people. He tells Amy about his incredible rise from playing pubs to touring with the likes of Bob Dylan, Neil Young and Liam Gallagher.

The Overtones talk about their decade in music. From painting shops in London, to having four top ten albums and countless sold-out tours, Mike Crawshaw, Darren Everest, Mark Franks and Lockie Chapman talk about their successes, and how they coped with the loss of their bandmate Timmy Matley.

Roachford talks about his musical influences, and being reincarnated as a cat.

Roachford sings an emotive version of David Gray classic, 'This Year’s Love', and also performs his own 90s track, 'Only To Be With You'. (from Radio Player)

International DJ Paul Van Dyk is without doubt one of the clubbing industries most recognisable names, within the trance and electronic music scene in particular. The phrase legendary status, a term too often banded about this day and age, sits perfectly. In this hour long documentary which first aired in 2015, Forces Radio BFBS Music Manager Neil Moore speaks to Paul Van Dyk about album "The Politics Of Dancing 3", whether he misses using vinyl and what got him into music in the first place.

"I was like a kid that was always listening to the radio when I did my homework and the first music that caught my attention was The Smiths. From then on I knew music means something more than just the blurry stuff in the background."

"And then the (Berlin) wall went down, I went to all the clubs and that was it, I was infected with the virus of electronic music."

Since his first album "45 RPM" in 1993 he's gone on to sell more than three million albums worldwide, win multiple awards for his work as a DJ and Producer, including a Grammy and of course the title of "Worlds Number One DJ" on two occasions. He continues to sell out DJ gigs all over the world using the latest technology money can buy:

"The stuff that I use on stage is pretty much like a recording studio so it's like I'm sometimes taking the composing process actually on stage."

When asked about whether he misses vinyl Pauls response was somewhat surprising:

"No. It's not about convenience it's about the possibility to do much more and be much more creative because I developed the same passion for produing and making music as much as I have for DJing."

"Combining that all together on stage is much more satisfying on a creative level."

In this exclusive Paul Van Dyk documentary we bring you some of the tracks from album "The Politics of Dancing 3" and we'll talk to the man himself and find out what his non dance music scene influences were when he was growing up?

"I don't know a single person who wasn't influenced by Depeche Mode... I was big fan of OMD, some stuff of the Pet Shop Boys I liked"

"A lot of authorities started to crack down on clubs, on parties, on festivals and I actually wanted to make a statement with that title to make sure they understand that this is a global youth culture. This is not just people going out and getting wasted."

"This is actually a very amazing thing because people come together regardless of... what God they believe in, what colour their skin might be. It's about tolerance and respect."

The House That Disco Built with Neil Moore & Lenny Fontana

In this BFBS music special we take a journey into New York’s 1970s disco scene.

Hear how the city’s night clubs directly inspired the design of London’s Ministry of Sound.

Andy Burrows talks about Razorlight life, and how a drummer became a fully blown frontman, guitarist and singer/songwriter.

Frank McCarthy talks to Andy about Razorlight's tours in Germany, their visit to the BFBS Germany studios for the 2006 World Cup and he performs acoustic tracks in the BFBS studio.

In an exclusive two-hour music special, Lenny Fontana shares personal anecdotes about his life and career with BFBS Producer, Neil Moore, starting with his formative years in New York when he absorbed a diverse range of music.

Turin Brakes join Amy Casey in the BFBS studio for a chat and play some of their tracks.

In this special programme recorded in 2016, Olly Knights, Gale Paridjanian, Rob Allum and Eddie Myer talk about the music they listened to while growing up and how this has influenced their albums.

Tom Smith from Editors talks tracks, tours and how watching Radiohead in the rain at Glasto changed his life.

Violence, the sixth album from Editors, was released in March 2108 and Amy Casey spoke to lead singer Tom Smith about their incredible success, favourite festivals, artists they have toured with and favourite tracks from the album.

Feeder's front man, Grant Nicholas, performs a brilliant set in the BFBS studio and talks about his career.

In this one-hour special, Simon Marlow talks to Grant about his influences, his guitars and his hair - just to mention a few things!

Tony Hadley: On My Own

Tony Hadley talks to BFBS about going solo in 'On My Own'.

The former front man of Spandau Ballet joins Nicky Smith to talk about his days in the band, his solo career and treats us to a couple of exclusive tracks in the studio.

Jack Savoretti performs acoustic versions of Home, Nobody ‘Cept You, The Other Side of Love and the title track Written In Scars from his 2015 album.

Charlene Guy talks to Jack about how his parents love of music, travelling and his 'spare' guitar.

Markus Feehily In Session On BFBS

Former Westlife singer, Markus Feehily, talks to BFBS about his life and being in a world-famous boy band.

In this one hour special, Markus Feehily performs some of his tracks, including 'Butterfly' and gives Jason Webster a lesson in the art of delivering a key change while stepping off a bar stool – all choreographed to hit record 'You Raise Me Up'.

In this one-hour special, originally broadcast in 2018, Jim talks to Hal about football, comedian Billy Connolly, the Armed Forces, the band’s 2018 album “Walk Between Worlds” and they talked numbers.

The Shires In Session

The Shires met thanks to fate and Facebook. Ben and Chrissie join Simon Marlow and play tracks in the studio.

In this one-hour special, The Shires talk about how fate and Facebook brought them together. They perform three of their own songs, plus a unique cover version of 'Dreams' by Fleetwood Mac.

Soul singer-songwriter, Tony Momrelle, performs acoustic songs in the BFBS studio and talks about collaborating with the likes of Sir Elton John and Gary Barlow.

In this one-hour special, Tony performs four tracks, including 'Lay It All Down' and 'This Could Be Us' from his album, 'Keep Pushing'.

A one-hour special with Ed Sheeran in BFBS studio in Camp Bastion, Afghanistan.

Originally broadcast in 2014, Ed talks to Simon Marlow about the artists that have influenced his work, his tattoos and he performs accoustic versions of 'The A Team' and 'I See Fire' in the studio.

Matt sings tracks from his fourth studio album, plus a cover of Sia's Chandelier'. He also reveals his genuine ambitions to join the Armed Forces after a stint in the Army Cadets as a child.

You Me At Six Original Music Special

You Me At Six talk music, forces and football in this one-hour special for BFBS.

Lead vocalist Josh Franceschi and rhythm guitarist Max Helyer chat to Hal Stewart about the Hollywood Palladium, their passions away from music and the thrill of hearing one of their songs played at an FA Cup Final

Fleur East joined Amy Casey for an acoustic session and a chat about life after the jungle.

Shaun Escoffery swaps the stage for the BFBS studio as he sings acoustic tracks and talks about his childhood, his musical family and boxing.

The son of a Swedish jazz singer mother and a British punk rocker father, Albin Lee Meldau chats to BFBS about his rise in the world of music.

Danny Parkinson delves into what makes Albin tick, his musical influences and his plan for the future.

Jodie Abacus performed exclusively for BFBS, proving he has a big voice and a heart of soul.

In this one-hour special Mario Chrisostomou talks through Jodie's musical influences; Stevie Wonder, Michael Jackson and Talking Heads, growing up in the mean streets of Lewisham, and… putting the hoover round for his mum on a Saturday morning.