Radio
/
Podcasts
/
Once Upon a Time on the Pitch 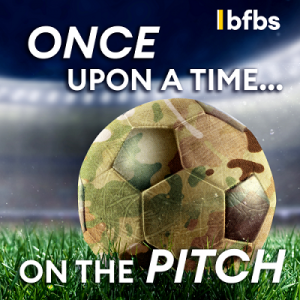 Football legends talk to the Forces

From punch-ups on the pitch to starring in Hollywood blockbusters, Vinnie Jones is a certified legend.

Proving his hard man status Vinnie agreed to take questions and banter from members of the Armed Forces, in a Q&A with football fanatic & BFBS Presenter Hal Stewart.

Vinnie shares the football stories behind his tattoos, how he began moonlighting as an actor and why he didn’t stay in football.

Also, why was he once smuggled out of a stadium? And who is the biggest star in his phone contacts?

Chris Kamara never gets tired of people shouting “Unbelievable Jeff!” at him in the street. In fact, he encourages it!

After 22 years in professional football, Kammy graduated to punditry and is responsible for one of best-loved quotes in sports commentary.

Kammy joins BFBS presenter and self-confessed football fanatic Hal Stewart for questions and banter from members of the Armed Forces.

Find out why Kammy was almost side-lined by a Royal Navy football coach, what goes on behind the scenes at Soccer Saturday and why he thinks there’s a current lack of motivation on the pitch and among the pundits.

From a clean sheet with the ref, to not so clean underpants, Gary Lineker has a fair few tales to tell from his time on the pitch.

The legendary England striker, who captained his country 18 times and now presents Match of the Day, joins BFBS’s self-confessed football fanatic Hal Stewart to answer questions from members of the Armed Forces.

Gary dishes the dirt on his memorable moments, including THAT awkward incident during Italia 90, and reveals his favourite team to play for and biggest career regret.