Richard Westley OBE MC: The Battle to Save Gorazde 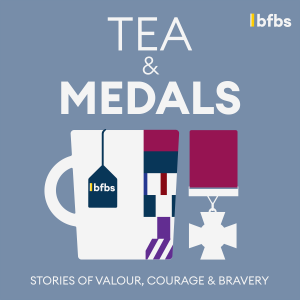 Stories of Valour, Courage and Bravery.

Former British soldier Darren Coventry talks to men and women who’ve received the UK’s highest military honours. Hear the real stories behind acts of bravery from the medal recipients and those who were there.

Major Richard Westley and his company of Royal Welch Fusiliers were working as United Nations protection force troops, attempting to keep the peace in the hostilities that followed the break-up of the former Yugoslavia.

Richard’s company of Fusiliers were protecting civilians in Gorazde, one of several Bosnian Muslim enclaves when advancing Bosnian Serb forces decided to attack the town.

Richard tells Darren how B Company managed to stop the Serbs from taking the town and prevent the kind of massacre that was later seen in Srebrenica.

The Fusiliers received numerous gallantry awards for their actions, including Richard himself who was awarded the Military Cross.

In 1942 the island of Malta was awarded the George Cross by King George 6th to recognise the population’s bravery and defiance during the Second World War. They refused to surrender despite continuous bombardment by German and Italian forces throughout The Siege of Malta. As well as The George Cross, a number of civilians were also awarded the George Medal.

Until recently, WO2 John Thompson was Britain’s most decorated Royal Marine Commando. He was mentioned in despatches in recognition of his gallant and distinguished service in Iraq and later received the Conspicuous Gallantry Cross following a Taliban ambush in Afghanistan.

In this episode with Jess Bracey and Darren Coventry, we find out about the recipients with Mario Farrugia, Chairman of the Malta Heritage Trust.

Between 1940 and 1943 the combined air forces of Italy and Germany launched twenty-six thousand aerial sorties against Malta. The island was part of the British Empire at the time, but Germany and Italy wanted to take this perfectly placed strategic location in the middle of the Mediterranean for themselves.

A sustained attack in 1942 became known as The Siege of Malta. Despite the continued bombardment the people of the island refused to surrender. In recognition of their heroism, King George 6th awarded the George Cross to the country in April 1942.

Eighty years on, it’s still important to Malta as Darren Coventry discovered when he talked to the people there who are keeping those wartime memories alive.

Until recently, WO2 John Thompson was Britain’s most decorated Royal Marine Commando. He was mentioned in dispatches in recognition of his gallant and distinguished service in Iraq and later received the Conspicuous Gallantry Cross following a Taliban ambush in Afghanistan.

In this bonus episode with Jess Bracey and Darren Coventry, Tommo explains what happened in Iraq.

Listened to the podcast? Now watch our videos: https://www.youtube.com/channel/UCiWYBIWzU_F5makrkqwGQ1w

By the time Corporal John Thompson made his way to Afghanistan in 2006 for Operation Herrick 5, he had already been mentioned in despatches in recognition of his gallant and distinguished service in Iraq. But that wasn’t the end of his bravery. Three years later in Afghanistan a Taliban ambush saw his company of Royal Marines fight for their lives in a gun battle lasting four hours.

John tells Darren about what it was like to fight the Taliban deep inside enemy territory and how his actions lead to him receiving the Conspicuous Gallantry Cross. When John completed his military service, he was officially Britain’s most highly decorated Royal Marine.

Tea & Medals is back for Series 2! But before we get stuck into more stories of gallantry and bravery, we find out more about our host Darren Coventry, whose military career spanned more than 1700 days on operation, including several tours of duty in Afghanistan and Iraq.

Podcast producer Josella Waldron asks Darren about his connections to the stories, with a look back at Series 1 and a look ahead to Series 2.

What drives the market for buying and selling medals? Is it an honourable desire to preserve history, or simply economics? In this episode, medal expert Mark Smith tells Darren about the keen medal collecting community, as well as the honours that can be bestowed by our allies.

1993 saw a big shake up to Britain’s military honours. A new look established equality across the ranks and a new medal filled a void in the hierarchy of gallantry. In this episode medal expert Mark Smith introduces Darren to the Conspicuous Gallantry Cross. They’re very rare, on account of the medal’s relative youth, and the circumstances for which they can be awarded. Nevertheless, Mark has a remarkable story of a deserving recipient.

The George Cross is on par with the Victoria Cross in the table of Gallantry, so how do they differ? The answer may not be as straightforward as you think. In this episode, medal expert and military historian, Mark Smith, guides Darren through the subtle differences between these top tier awards, and provides the context to its institution by King George VI in 1940.

More Tea: Many Medals for The Few

More Distinguished Flying Crosses were issued in the Second World War than any other award. In this episode, medal expert Mark Smith introduces Darren to some of his favourite DFC recipients, from the aviators known as ‘The Few’. Their daring dogfights in the Battle of Britain secured air superiority over the German Luftwaffe, resulting in Adolf Hitler abandoning his plans for an invasion on British soil.

More Tea: Gongs for the Girls

When did Britain start awarding medals to women? At their introduction, Britain’s military honours were exclusively for men. In this bonus episode military historian Mark Smith introduces Darren to the trailblazing women of the Nursing Service, who did their duty with no medallic recognition, and reveals which campaign rang the changes.

The First World War saw the advent of the Royal Air Force, and with a new service came more medals and tough decisions about who gets what. So how are those decisions made?

In this bonus episode expert Mark Smith talks Darren through medal admin and the hoops that have to be jumped through before one can be awarded.

The original statute for the Victoria Cross stated that the honour couldn’t be bestowed posthumously, but that’s not the case today. Public pressure led to the re-writing of the statute, all because of the actions of two young officers at Rorke’s Drift. Mark Smith tells Darren of their bravery in this bonus episode, and introduces a new medal to the mix, the Military Cross.

The Falklands War wasn’t just about the Falkland Islands. There’s another British Overseas Territory a thousand miles away which has its own story to tell about that particular conflict…

And who better to tell it than Keith Mills, then a Lieutenant in the Royal Marines, who at just 22 years old was sent to the tiny island of South Georgia to sort out a problem with some Argentinian scrap metal workers.

What started out as a diplomatic incident soon became a full Argentinian assault and Keith was forced to lead his detachment of 22 commandos in a battle that was impossible to win.

Darren Coventry talks to Keith about the difficult decisions he made that day, along with former Royal Marines Bob Ashton and Steve Holding who witnessed the bravery that would lead to him receiving the Distinguished Service Cross.

With thanks to Falklands Radio for the use of their archive recording of Governor Rex Hunt.

Queen Victoria wanted a new medal for her soldiers and sailors.

It would be an award for the bravest of the brave, something that would only be presented to those who had shown extreme bravery in the face of the enemy.

In this bonus episode Darren asks medals expert Mark Smith to tell him the story of the Victoria Cross.

There’s also a preview of episode four: how a 22 year old Lieutenant in the Royal Marines received a Distinguished Service Cross for his actions at the start of the Falklands War.

Captain Pete Norton was used to dealing with explosives. By the time he deployed to Iraq he had spent more than 20 years working in bomb disposal. He was so well known for his cool head and unflappable nature he was given the nickname “Perfect Pete”.

But one night investigating the scene of a devastating IED attack outside Baghdad, would change his life forever.

Pete was checking for further devices when a secondary IED exploded almost killing him. But while he fought for his own life, he also fought for the safety of his team, giving them vital life-saving instructions and refusing to be evacuated until he was sure that everyone understood the danger.

Darren talks to Pete and two of his multinational team members; Nick and Chris from the FBI, about the blast and how Pete also received an FBI Star for his actions.

With thanks to The VC and GC Association, The Federal Bureau of Investigation

In fact, she was so unhappy, she invented two new medals herself.

In this bonus episode Darren talks to medals expert Mark Smith about Queen Victoria’s important role in the story of British military honours.

There’s also a preview of episode three which features the recipient of a George Cross AND an FBI Star for his life-saving actions in Iraq.

RAF Helicopter Pilot Flight Lieutenant Michelle Goodman and the rest of her Merlin crew were used to flying into dangerous places. They were part of an Incident Response Team (IRT) which picked up seriously injured soldiers and took them to hospital for treatment. But one night in Basra proved to be like no other when the crew flew to the rescue of a young soldier with very serious injuries sustained in a mortar attack.

Michelle flew into the city at night and under fire from rocket-propelled grenades and mortars.

Darren talks to Michelle who is the first woman ever to receive the Distinguished Flying Cross, as well as other members of the Merlin Crew about the decisions they made and the risks they took to save a life.

With thanks to Stephen Vause and family.

When did Britain start awarding them to soldiers?

Corporal Chris “Barney” Balmforth wasn’t expecting any dramas as he and the rest of B Troop Queen’s Royal Hussars carried out their regular training and mentoring session at al- Jamiat police station. But when “something special” arrived in the back of a pick-up truck, everything changed.

Chris recalls how one bizarre incident turned everything on its head as the troop came under fire from Iraqi insurgents as they left the police station, leaving one of Chris’s fellow troopers fighting for his life.

Darren Coventry was also there that day, serving with the Royal Military Police. He talks to Chris, his commanding officers and fellow soldiers who tell him what happened and why Chris’s incredible actions earned him the Military Cross.

What does it mean to be brave? So brave that you’re invited to Buckingham Palace to receive one of the UK’s highest military honours.

Former soldier Darren Coventry talks to men and women who have done just that. He makes them a brew and they tell him the stories behind their medals, which are never quite as straightforward as they seem.

Darren also talks to those who witnessed these incidents first-hand and can tell us more about those who had the courage and the grit to be brave.

Coming soon. Subscribe now and never miss an episode of this original podcast series from BFBS.