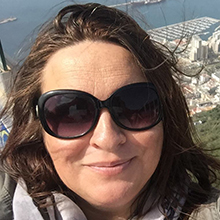 Ginster has been with the old firm quite a while clocking up some pretty decent Forces air miles. Two tours of Germany, a sojourn to Canada, tours of Cyprus, Gibraltar and now the Falkland Islands. She managed three tours to Iraq and two to Afghanistan, it’s fair to say our Ginster has a fair grasp of the Forces World. She spent 7 ½ months in Afghanistan returning for a 6 month tour less than a year later (any reports of Gini’s lengthy stays in the Middle East being compared to Alan Partridges 183 days in the Linton Travel Tavern will be strongly rebutted by her lawyers) it is simply not true that the RAF sent a Lexus to get her home, but She did take a 12 inch plate with her.