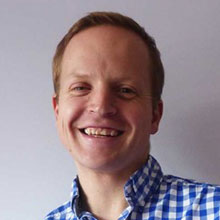 He’s worked in commercial radio across London, Sussex and Essex; always enjoying getting out of the studio and meeting listeners at a variety of outside broadcast events.

Since joining Forces Radio BFBS, Tim’s lived in Gibraltar, broadcast regular shows from RAF Brize Norton and fronted a variety of outside broadcast events; such as our coverage of D-Day 75 in Normandy, France, and presented stories on adoption in the forces, the role of religious faith in the military... and even a music special about The Lord of The Rings!

Best of all, Tim loves heading out from the studio; out and about, telling your stories, in community as you serve in or alongside the armed forces.

Outside of work, he’s a member of his local church, leads a youth club, enjoys swimming and is a big film buff!

Throughout, that ‘drama school vibe’ has never left, with Tim treading the boards in a number of am-dram productions and even working as a children’s entertainer.